At the beginning of the year (2016), I started feeling a funny burning sensation in my left armpit and what can be described as muscle pain in the upper corner of my back.

At first I didn't think much of it, until my girlfriend noticed some blisters on my back later that evening. 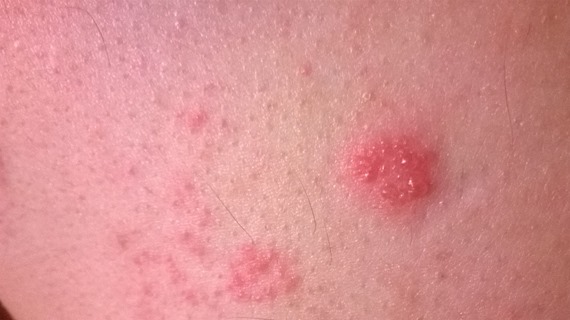 She quite cleverly recognised this as Shingles (gordelroos in my native language). I had no clue that an illness like that even existed and the very next day the doctor confirmed her diagnosis, by then it developed into full blown Shingles. 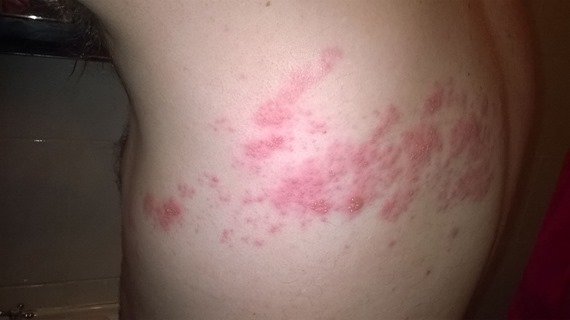 It is basically a reactivation or "waking up" of the chickenpox virus in your system, also known as herpes zoster (not to be confused with genital herpes). Apparently it is quite rare to get Shingles at my age (due to a weak immune system), it predominantly affects older people (from about 50 and up, 1 in 4 people).

Short answer no, BUT you can however give someone chickenpox if they didn't previously have the virus, so especially keep away from pregnant women, as chickenpox can obviously harm the unborn baby.

What is the complications?

You can develop persistent (potentially permanent) nerve pain (known as post-herpetic neuralgia) in some cases it might even affect your eye sight, so it is prudent to receive treatment ASAP.

There is a vaccine

Firstly and most importantly, if you have a weakened immune system, you might want to avoid the vaccine, as it contains a live but mild version of the virus. It is advisable to go for a blood test first, and like previously mentioned, for all intents and purposes this is chickenpox - pregnant women should avoid the vaccine.

Secondly the vaccine isn't permanent, protection lasts for about 5 years, you will need to get re-vaccinated, note that with every vaccination it becomes less effective.

Thirdly, the vaccine is FDA approved for ages 50 and up and recommended for anyone 60 year and older by the CDC.

I went to a VERY mediocre doctor, she basically vaccinated my girlfriend immediately without giving us proper information.

There is a 1 in 1000 chance for someone in their 30's (like my girlfriend) to get shingles, the concern however is that (as previously mentioned) the vaccine becomes less effective every time it is administered, which means the more vulnerable years (60 and up), puts her at a disadvantage (vaccine wise).

The doctor also didn't ask her if she's pregnant and didn't bother to do any immune system tests.

Guys, be careful before you pump any foreign substance into your body.