Last week I encountered rather interesting issues regarding threading, .NET and interaction with COM.

Have a look at the following console snippet:


The Test class is simply a windows form that contains a folder dialog which is obviously used to select folders.


The preceding snippet will fail as soon as we try to access the folder dialog.

But in other cases - when we're working with multiple threads, like in the following snippet, we need to set STA on the actual thread.

Now you might wonder what this STAThread attribute is all about?

First of all STA (Single Threaded Apartment) relates to a threading model being used in regards to COM objects - the folder dialog in the example makes a call to the Win32 API - which is a COM call.

I am going to attempt to explain this model by using the following crude image: 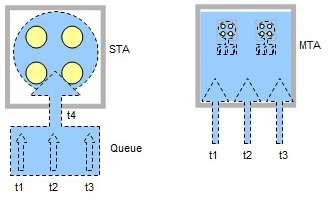 Looking at the image, notice the two silver rectangles - we call these silver blocks apartments, now an apartment is simply a cosy little place where our com objects live.

You will also notice the abbreviation MTA (Multi Threaded Apartment) - which is the default apartment for com objects in .net (the reason our snippets broke in the first place)

Back in the day before threading, we didn't need our objects to be safe against multiple processes modifying/accessing it at the same time - but as soon as multi threading came into the picture, it became important to isolate our objects.

In addition our application may only contain one MTA (logical), while it may have multiple STA's

Here is some additional reading on the subject: